Are We in Miami? Art Basel, PLAZA and the local creative scene. 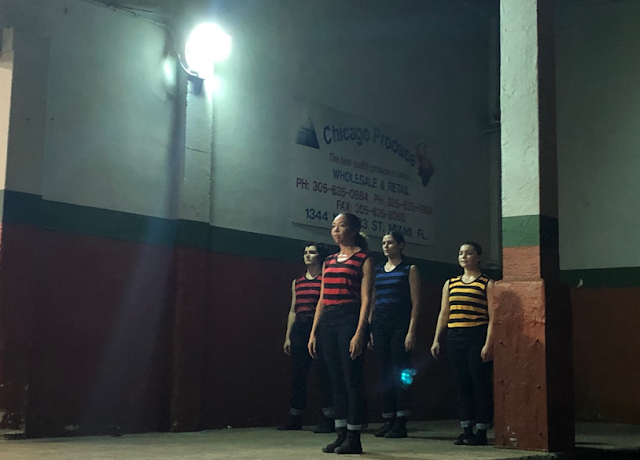 Art Basel was once again at full swing last December, bringing with it hectic traffic, art lovers, fashionistas, celebrities and travelers from all over the world. Creative locals and visitors were frenetically immersed into art shows, partying, taking pictures, and making their way from one place to another and exploring every corner of Wynwood, the Design District, Little Haiti, Miami Beach, and the River District, among other areas. Wherever you go, there was euphoric energy of curiosity and celebration.

Basel has certainly contributed to make Miami a more international urban hub, but that's not the only element on this equation. For decades Miami has been an epicenter for global migration, real estate investment, and mobility. Millennials are an increasingly dynamic and visible sector of the local workforce, driven by the dynamism and autonomy brought by the digital market. Several art districts, nonprofits, startups, and business incubators are booming and have established offices in the city. Particularly in the last decade, there has been a sustained focus on art and creative philanthropy by organizations like the Knight Foundation, the Miami Foundation, and the support of local government institutions like the City of Miami Beach and the Miami Dade Department of Cultural Affairs.
Art Basel Miami 2018 was an opportunity to experience first-hand the effervescence of the local creative arts scene, with the happening of diverse free or affordable parallel art fairs, the opening up of local artist studios, in site installations, interdisciplinary performances, collab spaces and neighborhood tours beyond the circuit of mainstream fairs. The influx of creative energy brought by these local events felt like déjà vu scenes of artistic sections of Brooklyn and other New York neighborhoods. 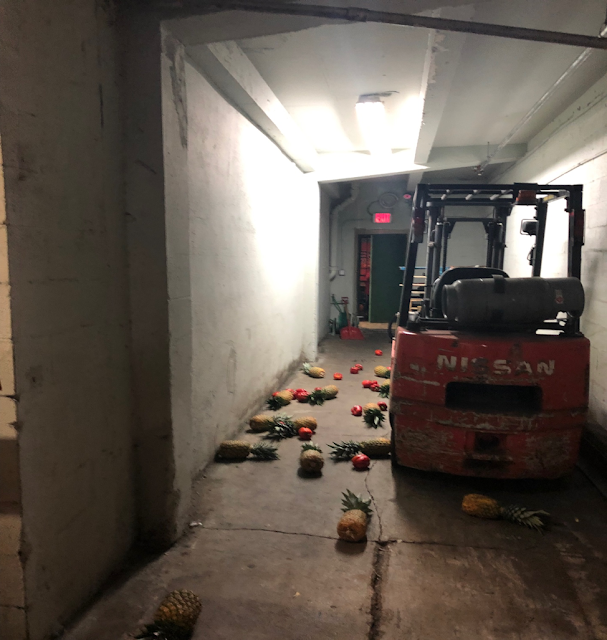 PLAZA was one of the most stimulating local art events I had the opportunity to attend this year during pre-Basel events. The in-site performance was created by local and awarded dance choreographer Liony Garcia and commissioned by Grass Stains, an initiative to mentor original site-specific art initiatives by the Pioneer Winter Collective. As with many other great artistic projects in the city, PLAZA was supported by the Knight Foundation.

Liony Garcia and the Pioneer Collective are among the protagonists of a vital movement of local artists, nonprofits and cultural institutions like Flamenco Nu, Bistoury, O Cinema, the Koubek Center, Wynwood Yard, Miami Light Project, Las Rosas, Little Haiti Cultural Center and many others that regularly present high quality, interdisciplinary and socially conscious art projects. As pioneers in the local art scenes, they have navigated and sorted out important obstacles, such as a lack of systematic interest in the development of local talent; having to work other jobs to sustained themselves; breaking up certain habits in the local art ecosystem that mainly present “the usual suspects”; and the lack of a more diverse, cross-cultural and up to date art critic, more responsive to the important shifts taking place in the city’s cultural landscape. 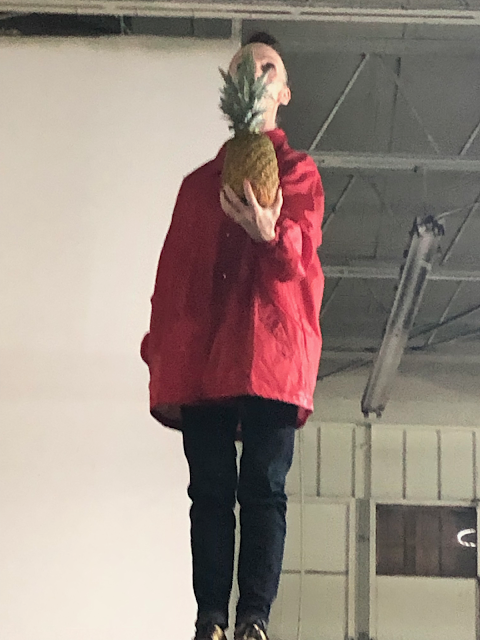 PLAZA was an in-site work and dance performance presented at Chicago Produce, a real produce warehouse in Allapattah, an old gentrified neighborhood and commercial warehouse district in the northwest area of Miami. The warehouse was not only the venue where PLAZA took place. Warehouses have become among the main urban spaces in Miami where local art is being made, artists gather and rehearse, art pieces are kept and commercialized; and where many arts, music, TV, radio, and film studios are located. Warehouses also define many emerging art districts across the city. In Miami, the warehouse has become probably the most important icon to represent the local culture in the last decade prompted by Art Basel.

When the audience arrived at Chicago Produce we had to wait outside for a little while. We were really curious and expectant, without really knowing what we were about to experience. Then we were divided into three main groups with assigned numbers. The expectation just increased. Then, the “workers” showed up, eight dancers dressed up in working attires highlighting primary colors. They guided the audience all the way to the back and throughout the different spaces of the warehouse, including a freezer compartment. The worker-dancers indistinctly walked or moved around, either carrying bags and boxes of produces, cleaning, driving machinery, checking inventory, loading, and unloading cars, always in a robotic and repetitive fashion.

Most of the produce was organized throughout the location in bags and colorful boxes that, together with the workers’ clothing, produced an in-site Disney coordinated type of visual experience on display. Throughout the performance, the dancer-workers were always doing mechanical and repetitive movements and dance sequences back and forth with the produces, in a seemingly Chocolate Factory’s style. Their gazes were lost and unattainable, keeping a sordid smile at all times that suggested a forced complacency and unreal joy for the “work” they were doing. The dancer-workers acted like faceless and meticulous modern slaves, modeled by an inherent sense of order, control and efficiency. 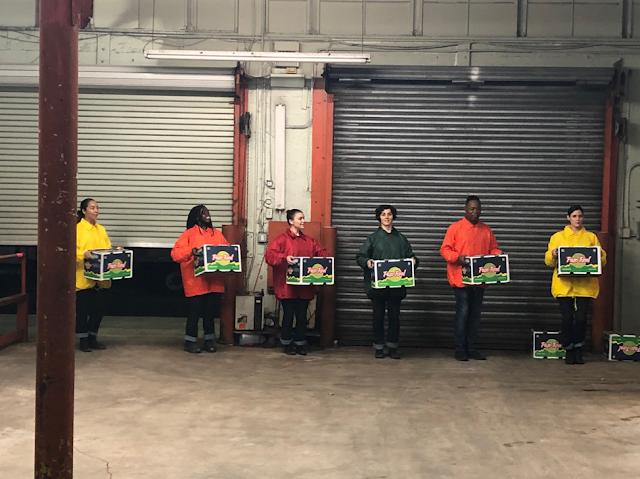 The soundscape created by the music selection was clever, in particular towards the end of the piece, where the dancer-workers collectively danced a feverish and happy choreographed salsa music. The scene reinforced the irony of the simulated cheerful working atmosphere. PLAZA tuned in the audiences with a high vibe of searching, exploration, and improvisation in the most unexpected venue.

Not only PLAZA suggested a critic to Miami’s visible process of gentrification and displacement of historic neighborhoods and people in the last decades.  From a smart and ironic gaze, this meticulous in-site work made visibly and questioned the culture of extreme efficiency and stress experienced by a good part of the local working force throughout the city.

For Liony, PLAZA was imbued with a personal touch. As many children in Miami, Leony hardly saw his father during his childhood, due to his hectic schedule working for this kind of business. Hence, Liony considers this piece as a personal tribute to his family and the city, a reflection on how much labor is involved in our lifetimes, particularly in warehouses. Ultimately, PLAZA was a due homage to the local working class and  “to the bigger economy of how things work.” 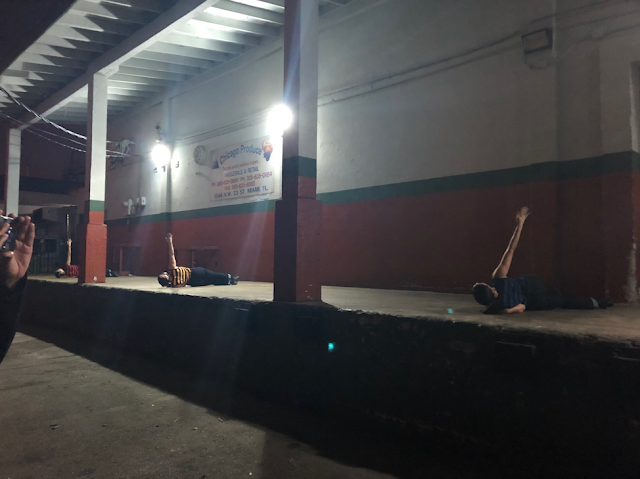 Undoubtedly, interdisciplinary art projects like PLAZA illustrated how much the city’s creative sector has benefited from the “Basel effect”.  For local pioneers like Liony, Art Basel was a great opportunity as a forum for an exchange of ideas among artists to experience and inform their creative process with was is going on in the art scenes globally. In his opinion, the yearly happening of the global art fair in Miami definitely nourishes the city, as a great platform for interdisciplinary work and networking with the international creative class.

However, the increasingly and constant flux of diverse artists, transnational creatives and multicultural voices who call Miami their home and that are contributing to its growth, calls for the need to make the local art ecosystem far more reaching and sustainable. There's a need to promote a comprehensive, coordinated, transparent inventory and wider access to information of the existing and upcoming resources and opportunities available to local creatives, beyond the traditional and usually closed up existing art networks.

Dr. Eva Silot Bravo
Director and Founder of Alafia Creative Entertainment, an arts-education company in the Wynwood Art District, Miami. PhD. in Spanish, Cultural Studies and Literatures from the University of Miami. An educator for the last decade at institutions like the University of Miami, Barry University and the Miami Dade Public School System. Blogger and Independent Journalist with several academic and non academic publications. An Arts Advocate and former Consultant and Diplomat in United Nations, Her work experience includes Arts, Education, Writing, Consulting, International Negotiations, Public and Media Relations, Non-Profits, Event Production and Marketing. M.A. in International Studies from Florida International University. and B.A. in International Relations from University of Havana. She has a formal training in Piano and Classical Music in Havana.